“Absolute Painting” is about forty oil and acrylic works on canvas. The smallest painting’s size is 10×12 cm, the largest – 1.5 x 2 meters. The exhibition also includes several composite images made with acrylic paints on cardboard boxes. Directly opposite the striking rural landscapes stands a three-dimensional cardboard Moscow Kremlin, which height is about one and a half of human growth. The story about the countryside to the west of Moscow would be incomplete without this – some residents of these places go to work just to the Kremlin.

Author’s interpretations of classical paintings (so-called “remakes”) from Leonardo da Vinci to Kiprensky are the key part of the exhibition. But Khvostov does not set itself the task to engage in creative discussion with the great authors. These paintings, or rather their reproductions, are the raw material source for him, as birches or rivers are the material for the village landscape. Remakes of paintings by Leonardo appear at the show not because of the fact that the village Dmitrovskoye is 30 kilometers closer to the Louvre, than Moscow. But rather because during the «village period in Gridchinhall» Oleg Khvostov has caught by the arm a good album with reproductions. Moreover, the faces on the remake paintings of “Lady with an Ermine” and “Poor Liza” (Khvostov had named this work “Girl with a Flower”) are owned by contemporaries, the real friends of the author. They have played roles in these paintings as well as in the theater actors play Hamlet or Richard III.

Most of the works for “Absolute Painting” was made during Khvostov’s six months residence in “Gridchinhall» studio. Paintings was created in the village, and this has determined their themes. Oleg Khvostov refers to everyday life of nearest Moscow area. For example, the case of the “Mona Lisa” Leonardo. Nearly every rural kitchen had a reproduction of this painting from the Soviet era «Ogonyok» magazine. Interpretation of the country «Sauna (Banya)» by Zinaida Serebryakova is a reminder to a terrible forty-degrees heat in July 2010. “Landscape with Cows” came after summer swimming in the Sheremetievskiy ponds near Rublevo-Uspenskoe highway.

The word “absolute” in the title of the exhibition might be perceived as pretentious. And it wouldn’t be right . Initially painting – the paint image of the form on the surface – took on a representational function. But with the advent of abstraction got rid of it. It is assumed that it can gain freedom both from illustrative function and from abstraction, becoming the “Absolute painting”. 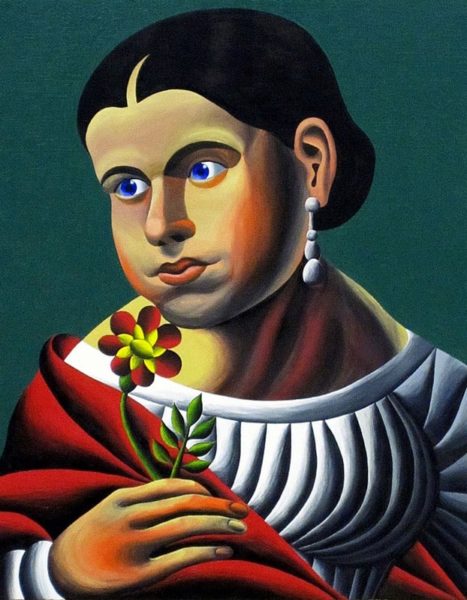