The new painting project of Vika Begalskaya, Shame, will display more than 30 artworks from the earliest to the most recent ones, arousing confusion and interest at the same time. Naked women – the first part of the project – are uninhabited and free. They shamelessly look down on visitors from canvases, displaying utter indifference to the rules and limits of decency deeply rooted in the society. The gush of sensuousness, of desire characteristic of Expressionism can be seen in every work by Begalska. Female shame, cast away, repudiated, unnecessary, the shame of the artist herself goes beyond the dry, cold traditional, whose domination suppresses everything that is not standard. Looking at Begalskaya’s paintings, one feels like asking whether women are symbols of the struggle against the chauvinist layer of culture, the spirit of negation? Ressentiment is the notion to answer this question.

The feeling of weakness, listlessness, anger helps oppose yourself to the source of suppression, to cast away the fetters of morals and morality and to go further, to the creation of your own system of values that negates the “enemy” system. Nietzsche spoke of three distinct ressentiments: envy, offence and blame. Let us add shame to this list, and we shall arrive to what Begalskaya wanted to say in her project: it is the reassessment of values, the Hegel dialectics of the slave and of the master. The “master” risks his life in mortal combat and wins, while the “slave”, afraid of risking his life, agrees to treat himself as an object and accepts the winner’s system of values. Accepting the fetters of shame, the woman enslaves herself, agreeing to play the role assigned to her by the alien moral law. But the rotting fetters of the master’s morals cannot hold her for a long time. Women and painting are the two “slaves” enslaved by shame as Begalskaya shows us.

“It is tempting to treat Shame as a title of this exhibition not as the shame of sexuality, but as the shame of painting. During decades painting was a “mean” kind of art in Russia. Artists called it “daubing”. So, Begalskaya’s show is interestCurator Anatoly Osmolovskying with the fact that it rehabilitates painting as painting proper, and not as the conceptual gesture appealing to such traditional media as oil and canvas,” Anatoly Osmolovsky, the curator of the project, writes about the show. 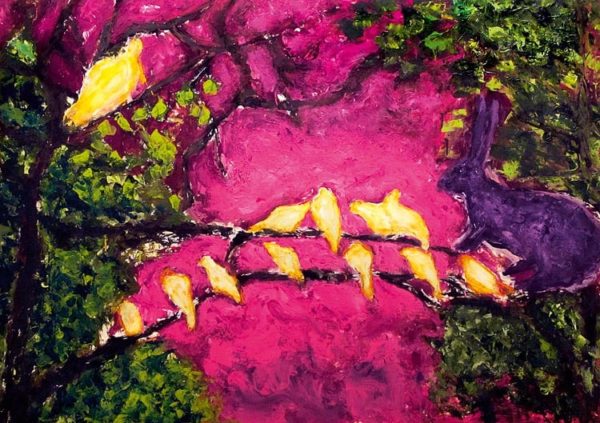